A new model of the all-electric eCollect refuse collection vehicle has been launched by Dennis Eagle. This is the second configuration of the ground-breaking eRCV which was originally launched in 2020.

The company chose the 18t 4x2 model as the next eCollect to meet urgent demand for a small zero-emissions RCV suited to collection rounds in urban areas with restricted access. These rounds are often in locations suffering from poor air quality.

The 4x2 eCollect is a smaller version of the original 6x2 but it has a 10m3 body capable of carrying 4.8 tonnes – the same as its diesel equivalent. And like the 6x2, it has a Narrow Track chassis to provide optimum manoeuvrability.

The vehicle is fitted with three battery packs instead of five, which are carefully balanced to optimise its load, with one centre pack and one pack on each side. 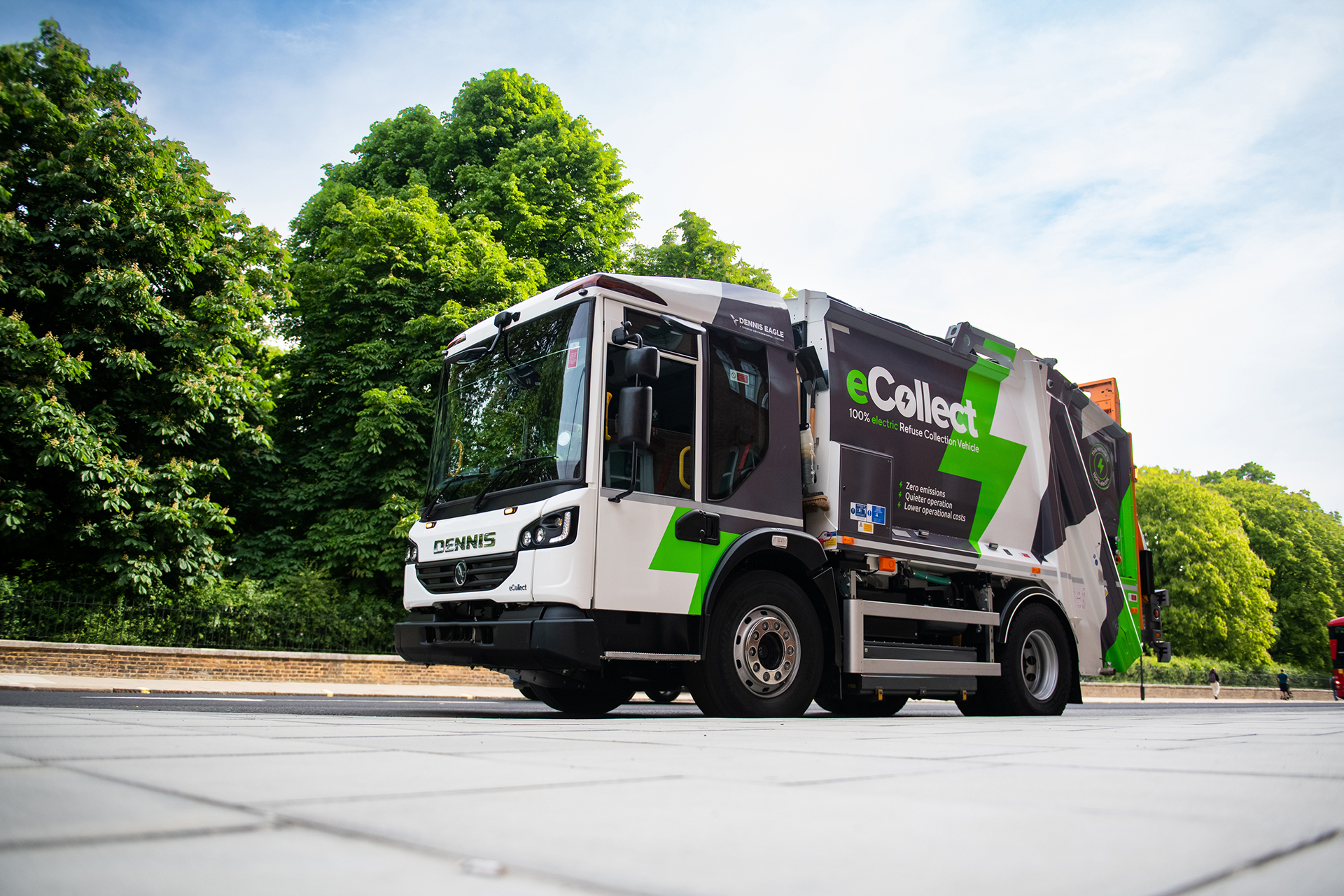 Together, they provide it with 180kWh of power, comfortably enough for a full day’s work on a typical double-shift round. It still has the same 200kW electric drive as the original eCollect.

The cab is also the same 5-star DVS rated Elite 6 model, with plenty of room for the driver and up to three crew. Once again, the eRCV is factory-fitted with the industry-leading DE-Connect telematics system.

And like the original eCollect, the new vehicle has been put through a comprehensive testing and homologation.

As per the 6x2 variant, this model requires an off board charger that outputs a minimum of 600v DC via CCS2 connection. However, with only three battery packs, it is considerably quicker to charge, taking only 3.5 hours to reach 100% after starting from around 15% residual charge.

The first 4x2 eCollect has been trialled in Kensington and Chelsea, where they successfully put the vehicle to work on a variety of rounds earlier this spring.

It returned to the depot after a double shift with typically 30-35% of its charge remaining. The nature of the rounds it has been covering has meant it only travelled around 35 miles a day but in practice, that will be typical of urban rounds the 4x2 eCollect is used for.

The new eCollect has proven to complete its rounds quicker than comparable diesel vehicles. This is largely due to the better acceleration it has from standstill. Given the stop-start nature of waste collection, this is not only important for operational efficiency but also for helping traffic flow. 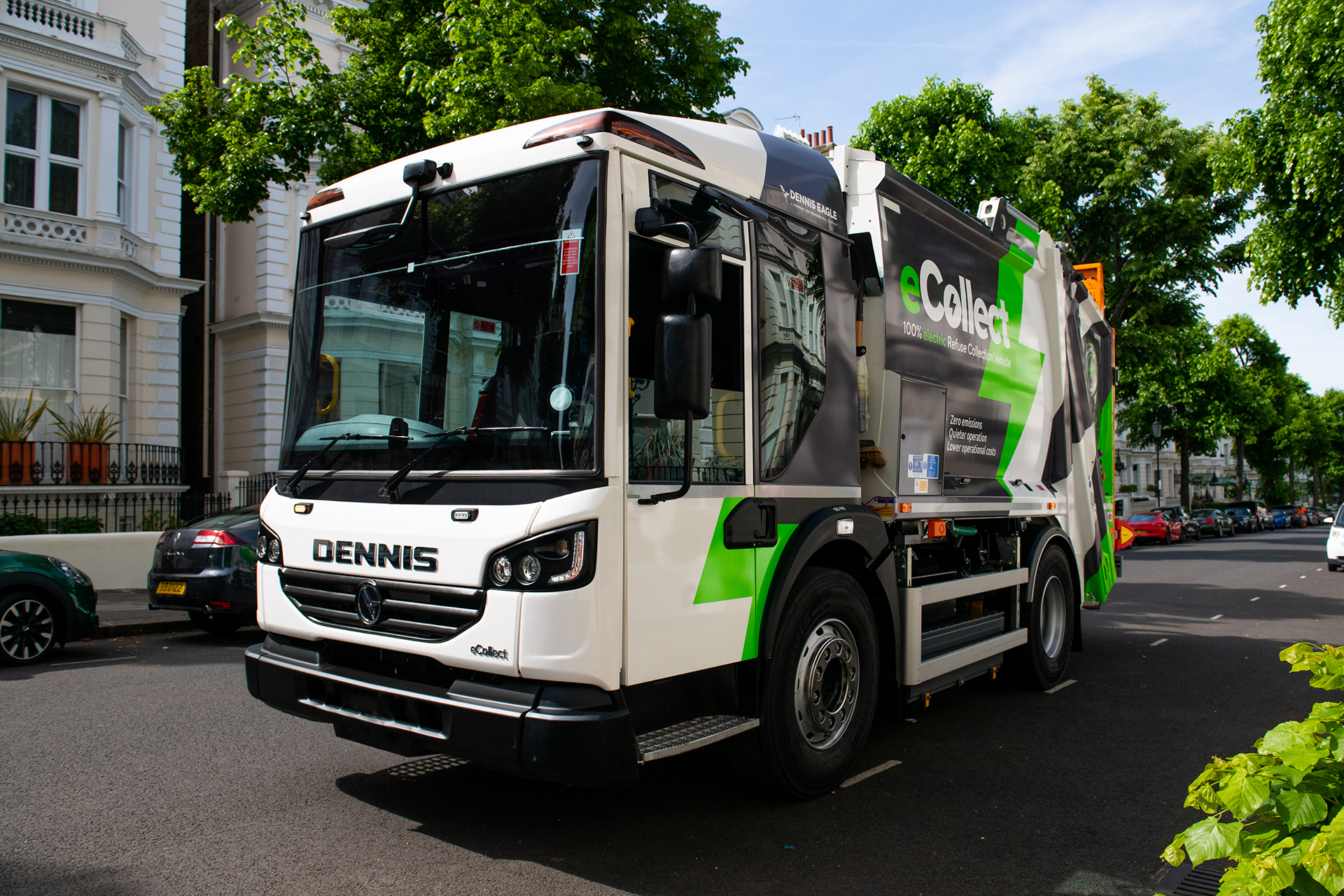 Once again, the eRCV is also much quieter and causes less disturbance for anyone in the vicinity. This means it can be used in noise-sensitive locations. Crews also appreciate the quieter operation too.

Dennis Eagle’s Sales and Marketing Manager Lee Rowland said: “The new 4x2 eCollect is firmly based on the original 6x2. It’s a similar vehicle with a smaller footprint – very little has changed apart from size.

“But it is a very significant development for our customers. We chose the next eCollect model to be the 4x2 because many of the places a vehicle of this size will be used have air quality issues which are being treated as a priority by our customers.

“It is already clear we have another operationally-efficient and cost-effective eRCV in our range.”